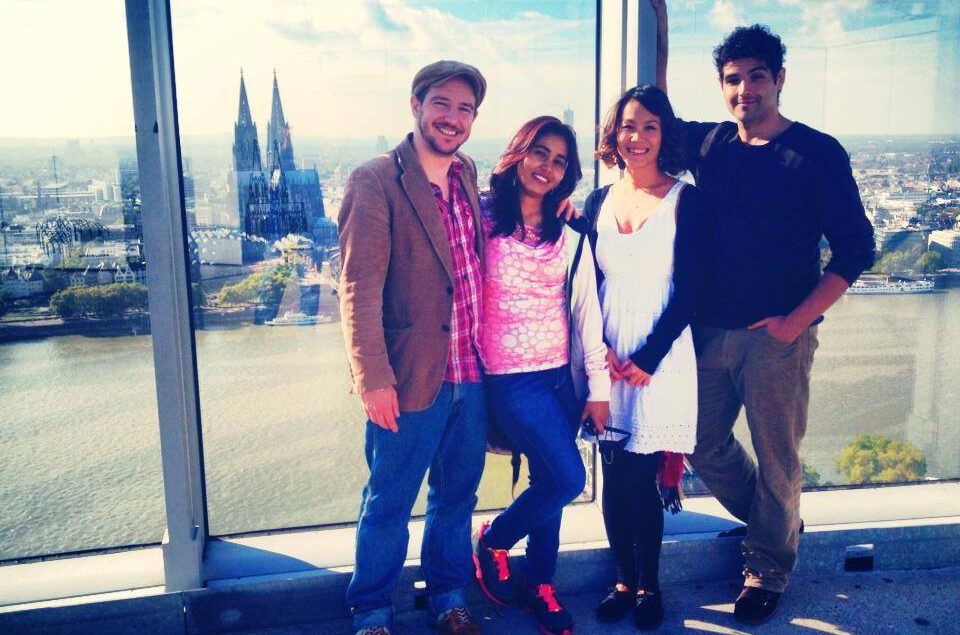 Matthias with his first tour showing Madhu, Rosi and Joseph his city

How did Freewalk Cologne start?

Its all connected to the Couchsurfing community. A community where you offer your couch for free to guests from across the world. I (the founder Matthias) was offering my couch for several guests and showed them the city from my perspective since January 2014. As a real “Kölsche” (grown up in Cologne) I am passionate and knowledgeable about my city. Like Cologne people, I love to encourage others to love our city as well, of course.

In summer 2014 when I was walking through the city with three couchsurfers (Rosi from Vietnam, Madhju from India and Joseph from Canada) we passed by several historical spots and I started telling them all the stories and facts about these sights.

A weekly tour, could that work out?

On the first Couchsurfing event that I announced, 25 people showed up and everybody had a lot of fun. Here I realized that my walking tour with all his important spots not only gives an overview of the sights but is very good in bringing people closer to the soul of our city.
After the tour the whole group ended up in a brewery – we still keep that tradition! It is always a lot of fun and sometimes we even stay for hours there. People get to know each other and it is not uncommon if the participants spend more time after the tour together. We are also very proud of having one Freewalk couple who first met on the tour and later fell in love.
It was that much fun for me as well that I wanted to try it out as a weekly event. And week after week there were more people attending the tour.

Making it a paid tour? Ah no…

As I am not working in a regular job (I made the decision that I don’t want to go back into a 40h week job after my studies) I still needed to live from something besides my freelancer income. So I was thinking of taking a fixed fee for each person. I visited some paid tours to check out the concepts but they didn’t convince me because of three reasons:

– the tour guide was not motivated

– a big amount of boring numbers and years

So what to do?! Still the Free Walking Tour concept in my mind, I decided to keep it a “pay-what-its-worth-for-you-tour”. I thought that it keeps my motivation higher to give an entertaining walking tour and the guests would have a better feeling as well. And from that day on, the idea of Freewalk Cologne was born.

Doing it more often – but not alone…

Several times I thought about offering the tours more often. But there was always the thought: “Could I stay motivated, if I do the same tour daily? What if I have other things to do?” I wanted the tour to happen frequently. So I came to the conclusion to keep this idea in my mind until I would find somebody who will join the team.
Instead of doing it more often, I started the Facebook page Freewalk Cologne and shared the events in different groups at Facebook (Neu in Köln, Au pair Cologne…). That brought new visitors and everything was running well.

On the tours, I met a lot of nice people who are living in Cologne as well. They were visiting the tours with their guests. And that’s why some guys and girls visited the tour several times.
For example Josh. He started with Couchsurfing when I started the tours. And since then he visited my tour around 10 times with different guests. He became a good friend with whom I visited concerts, 1. FC Köln matches and demonstrations in Cologne.
And Florian who worked as a consultant in a big company but wanted to do something more social by inviting couchsurfers into his home.

Some friends had the idea of giving some tours as well, with me together. Some of them never did it, but then Florian came up with the idea of joining me at Freewalk Cologne after quitting his job and while he is searching for new goals in his life. The idea of the daily Freewalk Cologne came up again.

As Florian is a professional Project Manager, he brought a lot of new knowledge in the team and developed the homepage and a Logo. And as he is living in Cologne for a long time as well, he could call himself a local. Both together Forian and me have a big network in Cologne and can organize different things, maybe other Tour-companies cannot offer.

The daily tours started in November 2015 and since then Freewalk Cologne is growing fast. Two more tour guides joined already and they support Florian and me as good as they can.
Every tour is an event for us and we want to give our guests the best feeling and entertainment.

Together we also developed the Principles of Freewalk Cologne to always give people the best Cologne experience with honest, open, entertaining and local connected guides. For us, this was never a problem as we were connected to this city our whole lives and we learned the Cologne style of living from childhood on.

Join the tour every day 12:11 or book an individual private tour.

If you want to become a part of the History of Freewalk Cologne, join one of our Free Walking Tours or become a free walking tour guide. 🙂

Any cookies that may not be particularly necessary for the website to function and is used specifically to collect user personal data via analytics, ads, other embedded contents are termed as non-necessary cookies. It is mandatory to procure user consent prior to running these cookies on your website.